Here are some immediate advantages:

the concrete and steel needed are reduced, as they are supporting far less weight - the generator

It’s a lot easier to maintain and service a generator either on the ground or on a stationary platform     over open water, rather than 260 feet in the air.  That is a utility lineman’s job with skills,  training,     complexity, safety concerns, and equipment costs multiplied many times over.

There is mechanical inefficiency and friction loss in every such arrangement as suggested.  But these inefficiencies are offset by lower costs.

This innovation is the subject of U.S. Patent US11,009,010B1, “Wind-powered electric generator with base-mounted generator”, 5/18/2021, John Saavedra and Look For The Power, LLC.  Here is the Abstract, written in the sometimes arcane language of patents: 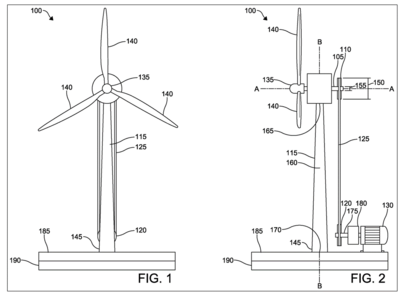 “Discovery consists in seeing what everyone else has seen and thinking what no one else has thought.”  Albert Szent-Gyorgyi, 1937 Nobel Prize for Medicine, Discovery of Vitamin C

With wind turbines, bigger is not always better.  Wikipedia states that an average-sized wind turbine today (1.5 MW) has:

29 tons of steel and 250 cubic yards of concrete in its base.

260 feet in the air.  Buffeted by strong, variable winds.  Often mounted over open water, such as rough seas or oceans. 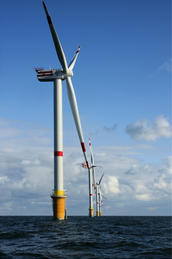 What if the generator were mounted either on the ground or the turbine base, instead of 260 ft in the air, connected to the wind turbine rotor with either pulleys and cables, like a ski lift or aerial tram, or with sprockets and chains for smaller units?

The electric generator is often the largest, heaviest, most complex, most expensive, and hardest to maintain component of any wind turbine system.  Maintenance is made all the more difficult because the generator is hundreds of feet in the air.

Needless to say, this represents a huge capital investment.