The process begins with two radiators.  Scientists and engineers call them “heat exchangers”, but to most people, they are simply radiators, allowing heat within to escape to the air outside, and vice-versa.  The radiators are joined with conduit, forming a loop. 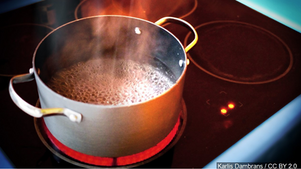 One of the radiators is placed in the attic of a house, and the other radiator in the backyard, under the full, bright, hot, sunshine.  The bottom of the two conduits is thermally insulated.  The entire circuit – conduits and radiators – is filled with water.

Two valves are added to the loop.  A pressure relief valve pops open when the pressure in the circuit gets too high.  Water heaters have pressure relief valves to prevent explosions if something goes wrong and it overheats.  A check valve has a one-way “gate” inside that allows fluid to flow in only one direction.

1.  The sun heats the outside radiator, heating and expanding the water within, but…
2.  that water is trapped between the check valve and the PRV.  The pressure rises.
3.  At a set point, the PRV releases the hot, pressurized water into the radiator in the attic, where it expands and vaporizes.
4.  This vaporization absorbs ambient heat within the attic, leaving cooler air behind.
5.  The cool air sinks to the living space below.
6.  The water continues through the blue conduit, giving up (“rejecting”) the absorbed heat to the outside air or the ground.
7.  The process repeats.

It’s possible to air condition a space using solar power alone – no electricity, electro-mechanical compressor, or expensive, environmentally-dirty refrigerant.  This process, which has a pending U.S. patent, relies on the concept that evaporation requires heat, and if heat is not supplied, evaporation absorbs ambient heat.  Consider what happens when we boil water on a stovetop:

We add heat, the water heats up, and the molecules within speed up their movements.  At a given point – the boiling point – the molecules do a sort of “mass exit” from the body of liquid water, and jump out, becoming steam vapor.  It’s obvious that we added heat to produce evaporation.  In this case, it's probably heat from an electrical resistance heater, or gas heat.

But we can also force water to boil by lowering the air pressure over it.  The lower the air pressure, the easier it is for the molecules to jump from liquid to vapor.  This is why cake mixes have lower temperature requirements for high altitudes, such as in the mountains.  The air pressure there is lower, and it takes less heat to produce the same effect.

Here’s another example.  Suppose you are at the beach, and the temperature is a very pleasant 72° F. (22° C.), with a light ocean breeze.  Very nice.  You go for a swim, and when you come out you are suddenly very cold.  This is because the breeze accelerates the evaporation of water from your skin.  You didn’t add any heat, but evaporation happens, and it literally takes heat right out of your body.  Of course, this is quickly resolved by drying off with a towel.  This stops the evaporation, and you feel comfortable again.

This also happens with refrigerators and air conditioners.  An electro-mechanical  compressor – heavy, complex, and expensive to repair or replace – compresses a refrigerant, causing it to heat up.  The hot, pressurized, liquid refrigerant is allowed to expand in the cooling part of the refrigerator, or the upstairs / attic evaporator coils in a whole-house air conditioner.  No heat is added in the attic, but the refrigerant evaporates when the air pressure over it is lowered, and this absorbs heat from the area around the evaporator coils, leaving nice cool air behind.

That compressor is a known energy hog.  Air conditioning takes a lot of energy, mostly for the compressor, but also some for fans to blow the air around.

But here’s the thing – the sun can do the compression for us!  Energy cost zero.  I took a one-foot long piece of black iron pipe, put a plug on one end, put a plug and pressure gauge on the other end, filled it full of vegetable oil, and laid it out in the summer sun.  The sun heated the pipe and the oil within it.  All liquids expand when heated, and the oil within the pipe tried to expand, but that iron pipe is not very flexible.  This produced high pressure within the pipe.

*** Warning – DO NOT TRY THIS AT HOME ***.  This is fully capable of producing an explosion, because the fluid heats and expands but the pipe does not!  *** 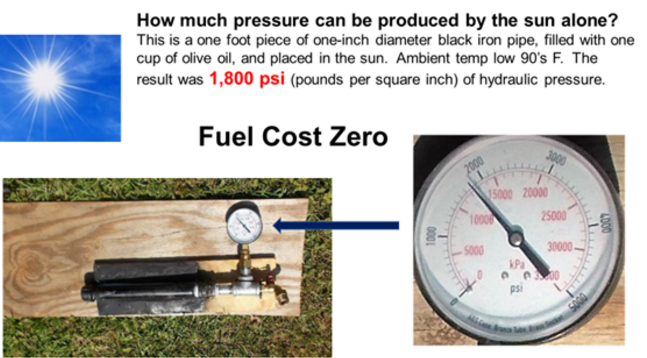 That is the basic process.  There are numerous optional enhancements, and a new, improved implementation ready to file soon.

I seek a forward-thinking research university to do the basic research and development leading to commercialization.

Using this simple process generated 1,800 psi of pressure.  Hard to believe, but the truth is, it could do no other.  At 1,800 psi it sprang a pinhole leak at one of the joints, and I stopped the demonstration.  Without that leak, the pipe would have undoubtedly exploded from the high pressure.

So, we can put a pressure relief valve on that pipe, set to release at something far lower, maybe 200 psi.  When that pressure is released, the water within turns to steam / evaporates, and this absorbs ambient heat, leaving cooler air behind.

You can observe the same thing by popping the pressure cap on a hot car radiator, but once again – DO NOT TRY THIS AT HOME!  When you pop that cap, the hot, pressurized water within rushes out, where the air pressure is much lower, and it instantly vaporizes, turning to steam that can produce a very serious steam burn.  However, on the edge of that steam cloud, it feels cool, because the evaporation took up all the ambient heat, leaving cooler air behind.

Here’s how this can cool a house: